How Fracking’s Appetite for Sand Is Devouring Rural Communities

Last week I published an essay in SAPIENS titled "How Fracking’s Appetite for Sand Is Devouring Rural Communities." It draws on material from my book and describes how frac sand mining has upended some people's lives in Dovre, Wisconsin.

Their stories highlight the deep emotional distress that occurs when connections to place and community are suddenly ruptured.

The essay is accompanied by a photo slideshow. You can find it here:

Email ThisBlogThis!Share to TwitterShare to FacebookShare to Pinterest
Labels: community conflict, democracy, Dovre, place, quality of life, When the Hills Are Gone

Now that When the Hills Are Gone is officially making its way out into the world, I'm honored to have the opportunity to give a few presentations and participate in some discussions about the book. Here's a list of some of the events lined up between now and early April.

February 22 - Book presentation and discussion @ University of Wisconsin-Stout, Jarvis Hall Science Wing room 112, starting at 7pm, sponsored by the Honors College. Event is free and open to the public.

Email ThisBlogThis!Share to TwitterShare to FacebookShare to Pinterest
Labels: book, When the Hills Are Gone

The November 2017 publication of When the Hills Are Gone garnered some media attention locally and beyond, and I've had the pleasure of giving a few interviews about the book.

Prior to the book's publication, I was interviewed by Erik Ness for the story "Communities Take the Lead in Battling Frac Sand Mines," which was published in The Progressive (May 23, 2017).

Also before publication, I spoke about my research and book in an interview with Culture and Agriculture (June 18, 2017), which sponsors the academic journal that published my first article about frac sand mining.

Not long after the book came out, I spent an hour talking with Jerry Poling from UW-Stout's University Communications. He wrote an excellent article titled "Frac-tured hills: Professor's book goes inside the fight against Wisconsin sand mines." It was carried by several local and west-central Wisconsin newspapers, including the CVPost.org (Nov. 22, 2017), the Dunn County News (Chippewa Herald) (Nov. 25-26, 2017), the Chetek Alert (Nov. 29, 2017), the Leader-Telegram (Dec. 3, 2017), the Spooner Advocate (Dec. 6, 2017), and possibly others.

In addition to local newspapers, I had my one minute of fame on the evening television news. I was interviewed by Emma Wheeler for News 18 WQOW Eau Claire, and a brief segment aired on December 7, 2017 (unfortunately, the video is no longer posted).

Beyond western Wisconsin, I was invited to be a guest on Wisconsin Public Radio's The Morning Show (Dec. 11, 2017), and spent the 8am hour discussing frac sand mining with host Kate Archer Kent and callers.

Lastly (so far?), I was interviewed by Jason Zasky for a feature in the online publication Failure Magazine (Jan 19, 2018).

Email ThisBlogThis!Share to TwitterShare to FacebookShare to Pinterest
Labels: book, When the Hills Are Gone

It's out! When the Hills Are Gone

Yes, it's finally here! After a long and sometimes intense process, When the Hills Are Gone was released in print last week.

When all is said and done, this book project lasted over five years from the start of research to the end product. Research began in early 2012 and I started putting pen to paper while the fieldwork was ongoing, publishing an article in 2013. I drafted a formal book proposal and three sample chapters in early 2015. After positive feedback from three university presses all interested in the project, I signed a contract with the University of Minnesota Press in September 2015. I then delivered a full manuscript by June of 2016 and a final manuscript by October of last year. I went through the copy edits in March and April of 2017, and then the final page proofs this past June and July. And now here it is: 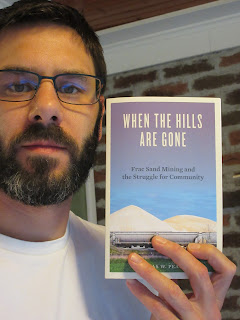 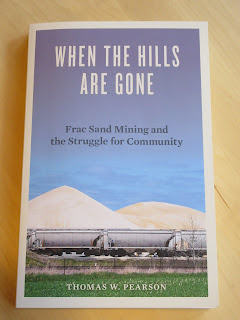 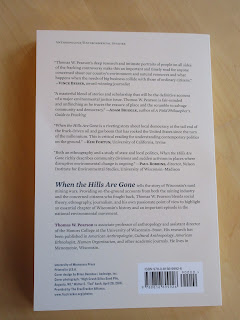 WHEN THE HILLS ARE GONE: Frac Sand Mining and the Struggle for Community
By Thomas W. Pearson
University of Minnesota Press - November 2017

When the Hills Are Gone tells the story of Wisconsin’s sand mining wars. Providing on-the-ground accounts from both the mining industry and the concerned citizens who fought back, Thomas W. Pearson blends social theory, ethnography, stirring journalism, and his own passionate point of view to offer an essential chapter of Wisconsin’s history and an important episode in the national environmental movement.

PRAISE FOR WHEN THE HILLS ARE GONE:

“Thomas W. Pearson takes us to the front lines of one of the great under-reported environmental issues in America today—how the fracking industry’s hunger for sand is impacting rural Wisconsin. His deep research and intimate portraits of people on all sides of the controversy make this an important and timely read for anyone concerned about our country’s environment, natural resources, and what happens when the needs of big business collide with those of ordinary citizens.” —Vince Beiser, journalist

"When the Hills Are Gone is a riveting, sobering story about local democracy at the whipped-around tail-end of the frack-driven oil and gas boom that has rocked the United States since the turn of the millennium. The writing is lively and reflective—deftly portraying the many micro-tactics through which local democracy can be undercut and the many kinds of people working against this in rural Wisconsin. This is critical reading for understanding contemporary politics on the ground."—Kim Fortun, University of California, Irvine

“A masterful blend of stories and scholarship that will be the definitive account of a major environmental justice issue. Thomas W. Pearson is fair-minded and unflinching as he traces the erasure of place and the scramble to salvage community and democracy.” —Adam Briggle, author of A Field Philosopher’s Guide to Fracking

“The churning engine of the global energy economy always touches down in local places, sometimes to brutal effect. Thomas W. Pearson provides a compelling and deeply personal story of one such place, the sand hills of Wisconsin. Both an ethnography and a study of state and local politics, When the Hills Are Gone richly describes community divisions and sudden activism in places where disruptive environmental change is ongoing.” —Paul Robbins, director, Nelson Institute for Environmental Studies, University of Wisconsin-Madison

Thomas W. Pearson is associate professor of anthropology and assistant director of the Honors College at the University of Wisconsin-Stout. His research has been published in American Anthropologist, Cultural Anthropology, American Ethnologist, Human Organization, and other academic journals. He lives in Menomonie, Wisconsin.

For more information, including the table of contents, visit the book's webpage:

Save the Hills Alliance 2017 Annual Meeting

Speaker, LeAnn R. Ralph, is a staff writer for the Colfax Messenger and the Glenwood City Tribune Press Reporter. She has been writing for newspapers for 20 years and also has written for the Dunn County News, the Country Today and the Janesville Gazette. LeAnn earned an undergraduate degree in English with a writing emphasis from UW-Whitewater, and she earned a Master of Arts in Teaching from UW-Whitewater. LeAnn is the author of five books of true stories about growing up on a small family dairy farm in West Central Wisconsin. She has been covering frac sand mines since the first mine in this area was proposed by Fairmount Minerals near Menomonie in 2006 and has written about proposals for sand mines, reclamation permits, environmental impacts, public hearings, conditional use permits, mine licensing agreements, the state Supreme Court decision regarding the Town of Cooks Valley, and boreholes. LeAnn also serves as a supervisor on the Otter Creek Town Board in Dunn County.
Presentation: Communicating in a Democracy: Letters to the Editor and speaking to elected officials. The four strands of the language arts — reading, writing, speaking and listening — are an important component of a participatory democracy. Writing Letters to the Editor for local newspapers, speaking during public comments sections of county boards, town boards, village boards and city councils and contacting state representatives and senators are an essential part of civic engagement. If you do not let elected officials know what you are thinking about a particular issue, such as frac sand mining, and how it will impact the environment, and your communities and neighborhoods, including roads and property values, they will not know their constituents’ positions. During this presentation you will learn more about communicating effectively through Letters to the Editor and will work on writing a letter. Editors love to publish letters from local residents on issues that will affect the community — with an emphasis on local, because they know their readers enjoy reading Letters to the Editor. Broadcasting a more generic Letter to the Editor to all 400+ newspapers in the state is not nearly as effective. During this presentation you will also learn more about communicating with elected officials — how to go about it, what to say and when to say it, and you will work on your own set of talking points that you can take to your next town board meeting, county board meeting or listening session of a state legislator. Let your voice be heard. Speak up!

Speaker, Ken Tschumper, is a retired dairy farmer who lives with his wife, Robin, near La Crescent, Minnesota on a farm his great grandparents homesteaded in 1867. He graduated from Winona State University in 1972 with a Degree in Biology. A life-long progressive Democrat, Ken has been involved in politics since the Vietnam War. He has served on the Governor’s Dairy Task Force, an Advisory Board to the Land Stewardship Project, and on the La Crescent Town Board. In 2006, Ken was elected to a term in the Minnesota Legislature. Among other committees, he served on the Health and Human Services Committee and was the chief author of the Minnesota Single Payer Healthcare bill, convincing 30 other members of the House to sign on as co-sponsors. He passed an update of the State Groundwater Protection Bill and was the only freshman legislator appointed to the Conference Committee for the Clean Indoor Air Act which eliminated smoking in public places and exposure to second hand smoke. In the last five years Ken and his wife, Robin, have spent their time and energy working to stop frac sand mining in southeastern Minnesota.
Presentation: We Need to Think Faster, Smarter and Bigger. Ken’s presentation will focus on techniques for better communications to and for individuals, groups and the public, especially using some aspects of current technology. He feels strongly that the anti-frac sand mining movement and other progressive movements, as well, have the potential to be much more effective and produce much more positive results.

Presented by Save the Hills Alliance (STHA), Inc.
Posted by Unknown on Monday, October 09, 2017 1 comment: 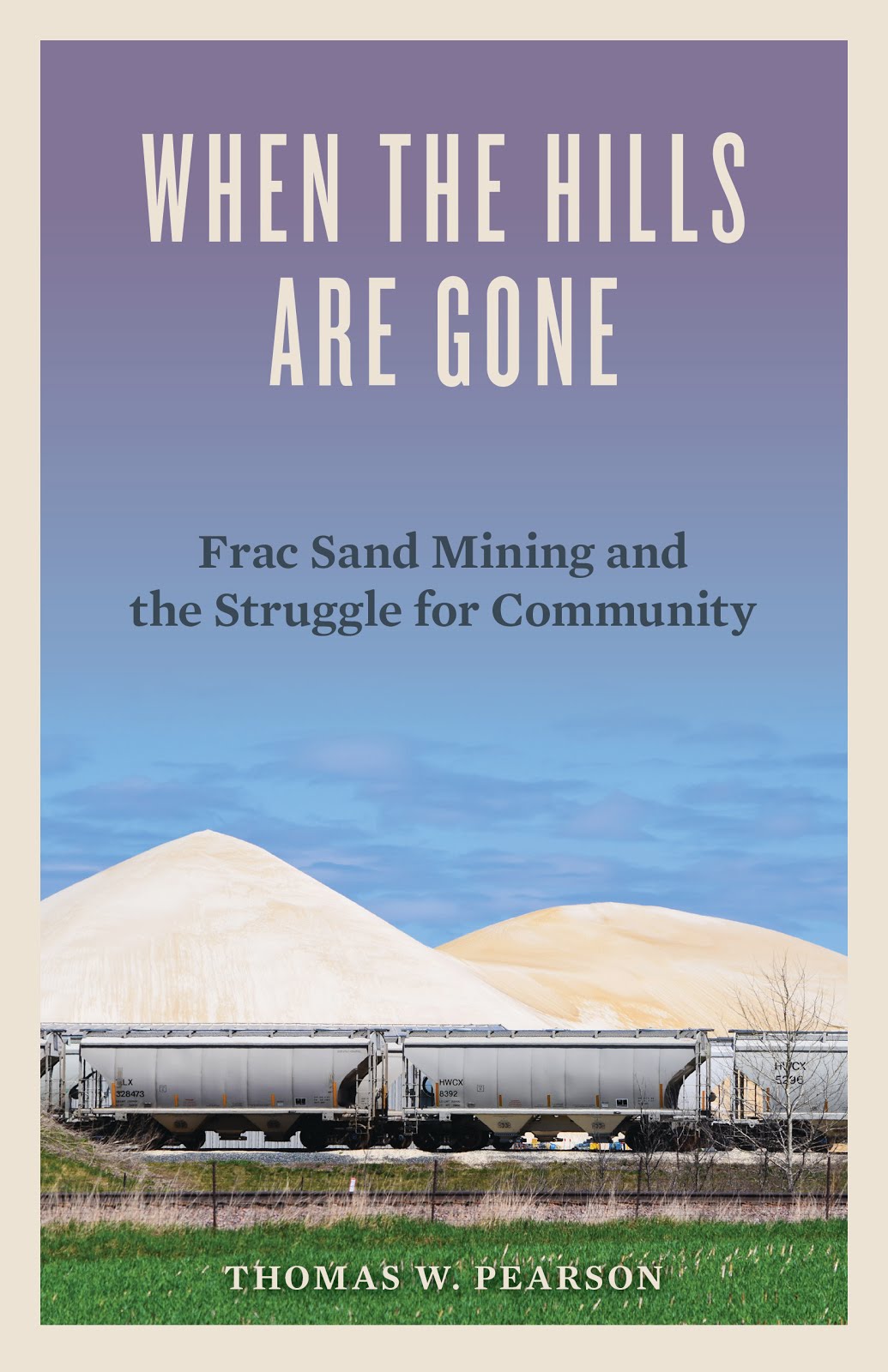